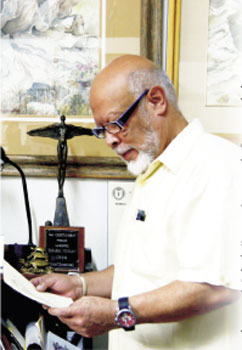 Born in Santa Catarina, Nuevo León, he graduated from the Architecture School by the Autonomous University of Nuevo León. Watercolorist as a vocation, this led him to take part at important watercolor and art communities of Mexico and abroad. He is a founder of the Watercolorist Mexican Society and a member of the Sociedad Catalana de Acuarelistas in Spain (Catalan Watercolorists Society), WATERCOLOR Art Society (Houston, Texas), and the Art Society Watercolorist (San Diego, California). He is a founding member of the Unidad Cultural Abasolo of the Architecture School of the Autonomous University of Nuevo León. He has presented his work in Mexico, Colombia, Guatemala, Finland, Argentina, the United States, Europe, and Asia.