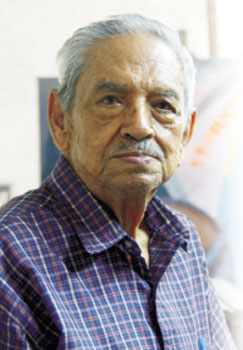 Rodolfo Ríos was born in Mier City, Tamaulipas in 1920. He was one of the very first students of the Plastic Arts Workshop of the Nuevo León University, and during eight years he was a teacher of the Visual Arts School of the Autonomous University of Nuevo León.

Because of his artistic career he has received prizes and recognitions, highlighting the first place of the Salón de Noviembre de Arte A.C. in 1964, 1989, and 1985; a City Hall merit of the Mier city, Tamaulipas in 1987; Arts Prize of the Autonomous University of Nuevo León in 2001 and Civic merit medal award in visual arts by the State of Nuevo León.